Amanobea Boateng is an alumna of Grenoble Ecole de Management. She completed her Doctorate in 2016. Her recent book published in October 2017 is about African Female Entrepreneurship. Based on key issues such as social feminism and the capability approach, she addresses the possibility of a potential overlap between social entrepreneurship and female entrepreneurship in Africa. She focuses her research on women from South Africa, Namibia and Ghana and questions the further development and advancement of female entrepreneurs. 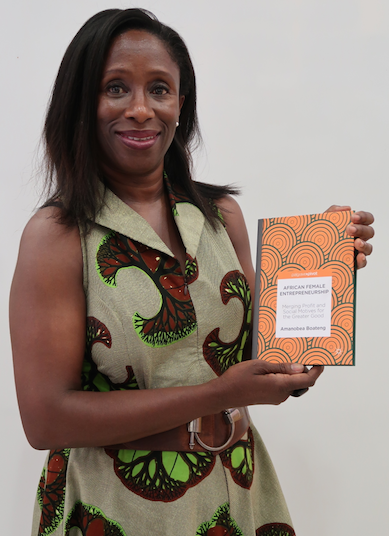 Those growing up in Ghana always knew about, but took for granted, the role of the women who dominated the informal sector in West Africa—market women and traders, including the powerful Mama Benz, as they were known across the border in Togo. Later, the women entrepreneurs I met as an adult inspired me by their self-empowerment, agency, and creativity. I discovered formalized entrepreneurship that was involved in science and technology and added societal value, and I was intrigued by the possibilities.

While working in South Africa to support the development of black-owned small and medium enterprises, I was again struck; but this time, it was by the determination of women facing huge challenges that inspired and led me to explore female entrepreneurship in my doctoral research. What I found sparked a real passion for African female entrepreneurship and its possibilities.

I heard many stories of women surmounting great obstacles to push themselves and others out of poverty and of education’s key role in this process. This became another link to explore: how women’s education and capabilities influence their entrepreneurship and their propensity and ability to help others. The stories told to me by women from different parts of the continent were rich, moving, and powerful, and one of these extraordinary women said to me, “you cannot let these lessons remain in files and gather dust on a shelf.” This sowed the initial seed for a book.

The book fills a gap in African female entrepreneurship research, which is understudied, and because few African women have written about this field, it attempts to provide an insider’s view of it. First, I show the historical importance of women’s entrepreneurship in pre-colonial times, the part colonization played in relegating women to the fringes of economic activity, and finally, female entrepreneurship’s evolution into the present time. Women’s stories are unpacked to understand how their entrepreneurship is shaped and either developed or hindered by factors such as personal qualities, life experiences, circumstances, traditional culture, and education. Their challenges are examined as well as their effects on the community. Their positive impact on others leads to an exploration of the overlap between their activities and social entrepreneurship, which has resulted in their becoming hybrid social entrepreneurs.

Based on the insights gained on how women entrepreneurs develop and bring others along with them as they are empowered, the book proposes that the impact of their socioeconomic development can grow through institutional support, access to affordable funding, and targeted education and skills training and thus help overcome traditional gender barriers.